- August 26, 2020
Hello again! Welcome back. I hope you are all well and ready for another blast from the past. :) Europe part 2. First time flying and New York!

Howdy! Today Is the day!

Truthfully, 2 days ago was the day. It was hard to find time to write when trying to fit in 2 flights and a trip to Times Square in one day! So it's the next day and here's the what you should know about my first flight and trip to New York.

1. God did not give me wings but I still found myself above the clouds.

I always used to tell people I didn't want to fly. I would quote my dad and say "If God wanted me to fly, he would have given me wings." That was before I realized there was a world of wonders outside of Texas. And the U.S. for that matter. -- We arrive at the airport and I'm still not nervous. In fact, I felt indifferent about it. My friend checked me in, thank goodness. I would have been absolutely lost walking in by myself. It was Spirit Airlines so you just walk up to the kiosk and print your ticket. Then head to the checked baggage line for a large bag or straight to TSA if you only have a carry on and personal item. The check baggage line was incredibly long and nerve racking but luckily I have a carry on luggage and was able to go straight to security. Did you know you have to take your shoes off going through security? (Now I know this is only at some airports. This was at IAH in Houston) Seems like a given right? I had no idea! After that, you find your gate and wait to board. It seems pretty simple but sometimes certain lines can take a long time and be very stressful. That's why it's a good idea to get to the airport at least 2 hours if not 3 hours early. You never know what can happen. My friends both had a large luggage and had to wait in a huge line only to get sent to another and then another before they finally got their bags checked. They almost missed the flight because of all the confusion, but fortunately they made it just in time. After boarding the plane I found myself lost in awe while looking out the window. I thought to myself, "I'm on a plane, heading to New York." Something I thought I'd never be doing, not for a long time a least. I couldn't have been happier than I was in that moment. Something about finally doing what I've wanted to for so long was exhilarating and refreshing and also a bit freeing. I was free from the chains and limits that I had given myself. And to top it all off the wing of the plane had 'Howdy' written on it. I found this extremely comforting because I use this phrase at work almost every day to welcome coworkers in. But today I was the one being welcomed!

There is nothing worse than thinking you have everything paid for just to get get to the airport and find out that your luggage is not included with your ticket. My bag was not included, therefore it was an extra 55 dollars at the kiosk to take it as a carry on.

3. New York takes more than an hour to experience BUT, just an hour can still be a blast.

First, we ate at a nice Ecuadorian restaurant and then made our way to Times Square. After snapping a few quick photos we stumbled across a street artist who drew us in about 15 minutes. Then we ran back to the rest of the group and packed up to go to the airport again! Unfortunately, I don't know my way around New York but there were a lot of really interesting and beautiful buildings. Can't wait to go back and spend more time there! Til' next time New York! (Little did I know I would be back only a year later!) 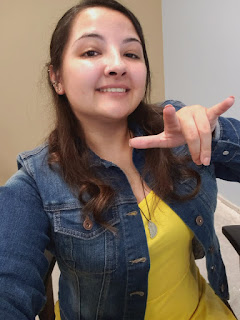 Aiken, South Carolina Fun Fact: In sign language, the I love you hand shape is also used when describing a plane flying through the sky. We are flying to Atlanta, Georgia on Wednesday and then we will drive to Aiken... I just wanted to post a quick heads up so y'all can be on the lookout for our next trip! I planned this trip with haste.. I'll tell you all about it and whether I goofed as much as I think I did once we get back to Houston. :)   Love Always, Bekah💗
Read more